Coming Together with Love

Phillipa visited us today again. She is a new friend who is a retired physiotherapist and visits us whenever we call out in our need. One of her favourite children is Thabani. He is severely disabled in every way. Can’t talk, walk or sit on his own. His limbs are badly deformed and he lies on the floor most days pulling himself in an awkward crawling, pulling locomotion which is painful to watch. He has calluses on his knees and hands. Phillipa organized a standing frame for him from Gordon, whom we haven’t met yet  but who has such a big heart for these needs that he is always ready to put hammer to nail to come up with some contraption that will assist physically disabled children. For the first time Thabani “stands” up and looks at the world at the same level as everybody else. He loves it. He responds in a wide mouthed bellow which clearly shows his pleasure.

One day Phillipa was  showing one of the carers how to position Thabani in a way to get him to stand up from a sitting position. They did this for a while and then Phillipa demonstrated on the therapist herself so she could understand better what to do with Thabani. When Thabani saw this demonstration he roared with laughter. Even though we don’t know what his exact intellectual abilities are, he definitely found it hilarious to see Phillipa do “therapy” on one of the able bodied ladies who work at the centre. His laughter was so infectious that we all cracked up. It was a moment of pure joy. The question is, of course, how much do we underestimate people who are unable to communicate in the normal way? In the picture below he is sitting at a table putting objects into a container. He thinks he is very clever. And indeed he is.

Today Mlu and I visited Baba DK*. He lives with his wife and his daughter. Mlu came across him during his community visits. He is an old man who has suffered a severe stroke and has an amputated leg. Although he has a prosthesis he was not using it. His left side is semi paralysed and he has several fingers missing on his right hand, from an accident years ago. He sits slouched in a wheel chair or lies on his bed all day.  His wife has to feed him and he becomes very irritable and frustrated.  He is not a small man so to move him from chair to bed, or into a taxi to go to the clinic is hugely problematic for his wife and daughter. Mlu found the whole family in a state of depression. We decided to send our vehicle with two men to fetch him and bring them to the centre so that Phillipa, the physiotherapist, could advise us and them on the way forward. We worked out a regime of getting him to exercise his left arm and to start wearing the prosthesis and begin putting weight on it by standing up for short periods of time.  We taught his wife and daughter how to do this.  We decided to fetch him every Monday to come to the centre for supervised exercising and for a communal cup of coffee and biscuits, and just to get them out.

Every Thursday Mlu will visit and check up on his progress and help with the exercises to give his wife a break. And today I joined Mlu and we delivered a strong steel table (per kind favour of a local Engineering business), on which he leans to get to a standing position, and we also brought a feeding cup.  Their gratitude was beyond description. When I saw the table they were trying to use I nearly had a heart attack, it was so rickety. When we filled his new feeding cup (which I had bought for the princely sum of R22.00), with water the difference it made was instantaneous. He was able to hold it with his right hand and drink without any assistance from his wife and without spilling, giving him an independence he has not had in a long time. How is it possible that something so small and basic can make such a difference to someone’s quality of life?

The home is basic but clean and light, and after helping him use the new table and doing his exercises we sat and visited for a while, basking in their joy. When Mlu and I left we both agreed that we should be paying somebody for the privilege of this recent experience. It certainly set the tone for the rest of our day. 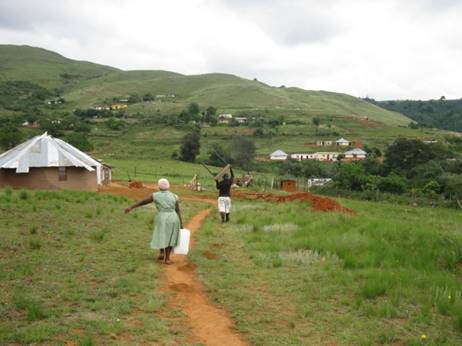 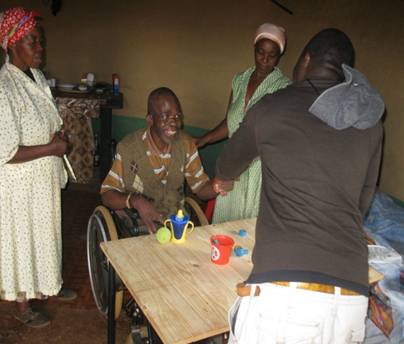 Mlu saying goodbye as we leave

*We use abbreviations or initials to protect our client’s privacy.

Today our “new “ vehicle arrived. What excitement and what a big help it is going to be with the old Isuzu needing some serious doctoring. A third vehicle was not something we had even thought of purchasing until Agence Francaise de Development in Johannesburg generously contributed almost R40 000 towards our vehicle fund and then Peter went a-hunting and found us a lovely second hand double cab Isuzu and we simply don’t know ourselves. Our deepest thanks goes to AFD for making this possible. Also thank you to Isac Coetzer from Burg Motors for giving us a good deal. 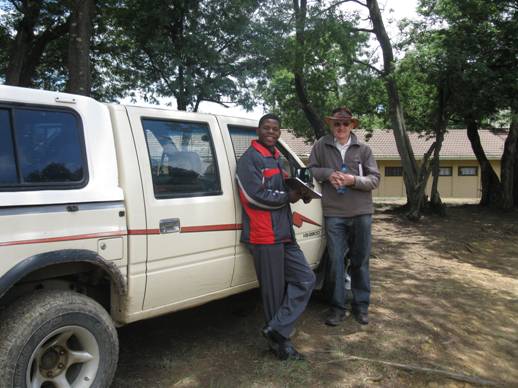 Did you know Christmas is round the corner? J………………… end of the year news following soon !

You can follow any responses to this entry through the RSS 2.0 Both comments and pings are currently closed.